2014 is soon ending and I decided to tell you about another adventure of our summer cross-country Dakota Goes USA trip before this year is one big memory. Minnesota was one stop that Humom was sure NOT to miss.  We had friends to see and nothing could have kept us off this trail!

We had just crossed Lake Michigan on the S.S. Badger Car ferry.  It was a long travel day of boats and autos… 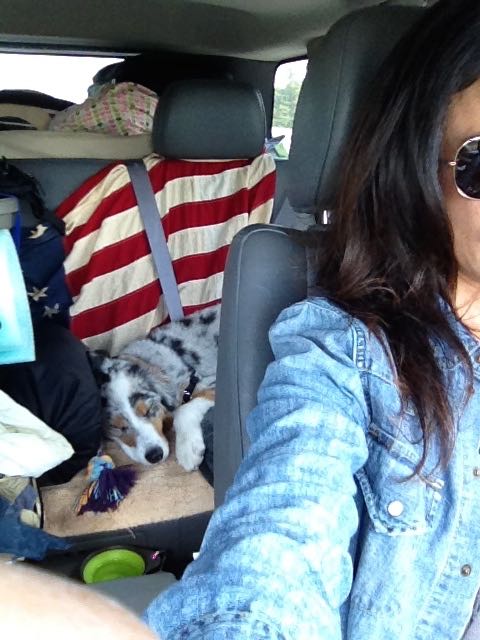 wake me when we’re there

Our destination was Kasson, MN. It was one of very few stops that wasn’t a National Park on this trip. Little did we know as we headed for our friend’s house, that it would be a park adventure for sure!

We were supposed to be nearly there…

…this doesn’t look right. Our GPS has steered us in the wrong direction!

We were greeted by a beautiful little girl who seemed to expect us.

As soon as Humom saw her face (and although we had never met her in person) she knew that it was our friend, Eleanor.  We had actually reached our friends after all! We had no idea that their unfamiliar address would reach THEIR farm!  So, our incredible travel day continued with a golf cart tour by Henry… (I sat in front to help navigate)

Henry was older than me at only 7 and was an incredible guide throughout the farm! We cruised around and saw every great spot. There were baby chicks, the tool and machinery barn, the pig pen, the garden shed and crops.

The next day we not only played and ran everywhere, Eleanor decided to use Humom‘s iPhone to capture the day’s events. 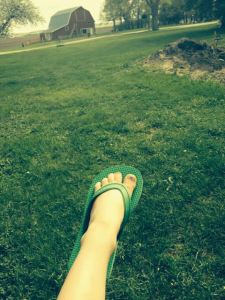 The farm pigs were called “bacon” for some reason and even though they were pretty big, they were still just half their adult size!  They were not allowed to come out to play with me that day and to tell you the truth  – I was kindda intimidated by them.

There were so many fun places to play but the best part of being here was having new friends to hang out and run with!!

Emmit and Bodie play a mean game of hoop!
And, Henry is a super fast runner.

He raced me several times around the yard till he needed more speed and jumped on the motorcycle!

Humom said this was a postcard picture.  I wanted to stay for several more days but we were headed for some cities that were twins… not sure what that meant except that we had more friends to see there! We said “so-long” to all out buddies, the Smiths. I hope it won’t be too long before we can come back and visit them again!

We moved on to Minneapolis.  Thanks to our friend, Britta, we were able to catch a night on the town and see the beautiful city.

This waterfall behind me is called St. Anthony’s Falls.  It is the only true waterfall of the Mississippi River.  It is pretty powerful and these bars are up to keep me on the safe side!

We walked around town and hit as much as we could in one night.  We had beautiful weather and fun company!

“Good night, Britta”.  I was exhausted from a great time in Minnesota!