We followed a beautiful river trail at Tumalo State Park yesterday. I believe the outing could have been more spectacular if we didn’t have to keep stopping for this Stanley guy…

Why do we gotta wait for him…?

I met a Great Dane and two Bernise Mountain Dogs on the trail. The river was making a lot of noise. It’s called the Deschutes River. I wanted to jump in but – was not allowed. I guess it was probably for the best. The water was going pretty fast and this time of year it is super cold. The river is 252 miles (406 km) long! There are so many fun trails along this river in Bend, OR. You can take a new one each time you wake up! 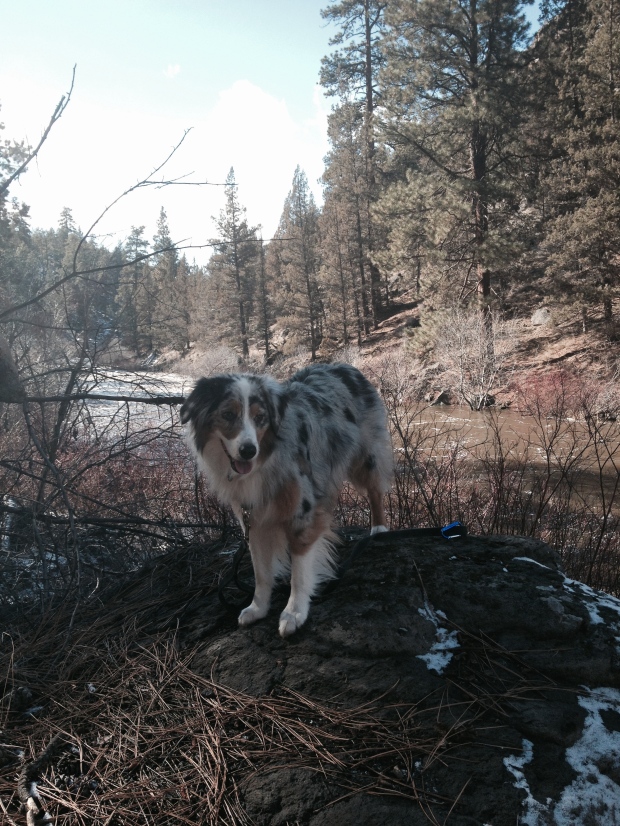 The Deschutes River was really moving!

So anyways…this Flat Stanley guy is really lifeless. He sits in Humom‘s pocket and doesn’t make a peep. He always has this same dumb look on his face…

Flat Stanley clinging to a Cedar

Lots of trees edge the narrow trail. So, in some parts you have large trees or rock boulders on one side and just water on the other. I have great balance and since I am on all fours, it is just an easy walk for me. Flat Stanley couldn’t make it on his own and he is so skinny that the wind almost blew him into the river! There was snow on the ground on some parts of the trail so this time of year you have to be prepared for that and bring the proper gear and boots. I wasn’t wearing mine so we stopped where it got icy and turned back. I heard this area is a really fun place to camp in the summer. There’s lots of fun things to do nearby and so much wildlife!